Durga Dhakal, a Nepali poet currently residing in the UK, has launched a Nepali poetry book containing themes of nature, spirituality and womanhood. The title of the book is Akshar ko Parakampan. 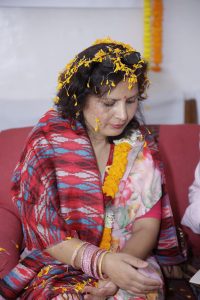 This is poet Dhakal’s first book and she said: “When I first sat down to write some poetry, I thought the words would come to me easily but this was not the case. Every poem I wrote was born through hard work and dedication.”

Dr Surendra KC talked about the duality within Nepali people who move countries and how they seem to remember their homes fondly. Dr KC went on to say that he felt Mrs Dhakal was hit by a wave of nostalgia as many of her poems are about her birthplace and life in Nepal. Chancellor Ganga Prasad Upreti also mentioned that writing poems about Nepal despite living abroad for over ten years was a pleasure to see and a ‘gift’ to the people. 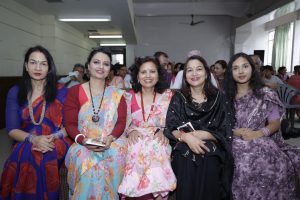 Dr Ramesh Bhattarai, touched upon how the poems felt familiar and expressed his own emotions as many of the poems were about places, he called home. Author Yuvraj Nayaghare offered many congratulations and commended poet Durga Dhakal and said that writing is not easy when you are away from your home country.

Dr Shantimaya Giri provided a brief review of the book and said that she hopes Mrs Dhakal will carry on writing these poems in the future and Suman Barsa also agreed with this sentiment. The program was facilitated by noted poet and founder of Yashaswhi Prangya Pratisthan, Ranjana Niraula . 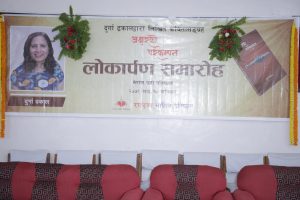 The book launch was successful and Mrs Durga Dhakal wishes to continue this journey of poetic expression. The program was chaired by Poet Rishav Dev Ghimire.