In order to celebrate 75 years of diplomatic ties between India and Nepal, the Embassy of India in Kathmandu organised a music concert “Sangeet Sukoon” on Friday featuring performances by the Indian band Carnatic 2.0 and Nepali band Kutumba.

According to the official statement, Foreign Minister Bimala Rai Paudyal, Minister of Industry, Commerce, and Supplies Damodar Bhandari, and Chief of Army Staff of Nepali Army General Prabhu Ram Sharma were also among other dignitaries who attended the event.

Carnatic 2.0 band played a mix of traditional Carnatic ragas and retro-Bollywood songs with a modern twist during their performance at the event while Kutumba, through its performance, highlighted the depth of Nepal’s indigenous music. 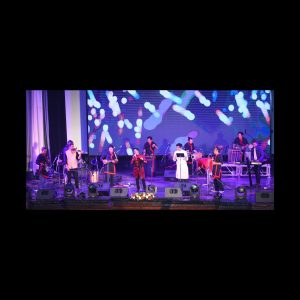 Carnatic 2.0 is an experimental Indian band that creates a fusion of different Ragas of Carnatic music along with various western elements. Kutumba is a folk instrumental ensemble committed to the research, preservation, and celebration of the diversity that exists in indigenous Nepali music, the release added.Carnatic 2.0 will also be performing again at Patan Durbar Square, situated at the centre of the city of Lalitpur in Nepal on Saturday.